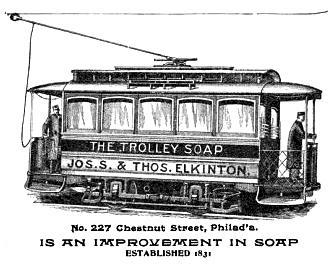 A long page grew out of this much shorter post. The Web page on this site is called “Navigation.” This post could have a fancier title; for example, “How Transportation Transforms Our View of Geography.” We know that the way we travel shapes our ideas of location and distance. One example is this joke: “You’re from New Jersey? Which exit?” A second would be the tie between Sugar Hill and the “A” train; we evade the landscape by zipping along under or above it, so that a destination is the place on the route where we return to the landscape. A third comes from an imaginary but typical conversation with a friend who lives in the Greater Northeast. The friend has found a fabulous new diner or thrift store. “But how far away is it?” “Two buses.”

In the middle of the nineteenth century, the spread of urban public transportation with fixed routes and schedules provided a new, if supplementary, way of giving locations. In 1867, when a new version of Edwin T. Freedley’s Philadelphia and Its Manufactures (with advertisements!) appeared, the hundreds of omnibus cars of the late 1850s had been replaced with street cars―still drawn by horses, but drawn more smoothly and quickly along a rail. Some of Freedley’s advertisements give, in addition to street addresses, directions that are also standardized, because they are based on passenger car routes. Customers are advised to take a public street car to a factory that makes elegant private carriages. That seems ironic, like using a computer to buy a manual typewriter, though it probably reflects enduring class distinctions as well as the difference between pleasure and display, and the need to get from one place to another.

Some companies advertised their street-car connections visually rather than in words. They show, not a generic bustling street scene, but the very line that passed the company.

The Trolley Soap advertisement (from The Reporter’s Nosegay, 1896) jumps ahead into the last years of the century, but I could not resist it.

Navigation Continued: “Marks and Numbers of Streets,” from the Philadelphia PUBLIC LEDGER, 1836

7 thoughts on “You Must Take the Red Car”