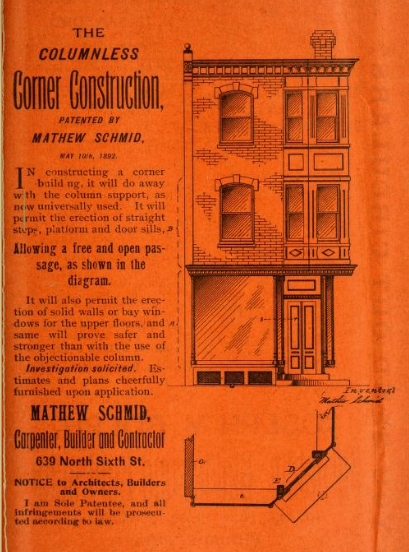 In the 1895 advertisement above, Mathew Schmid offers to relieve customers of a feature common in cities like Philadelphia. He does not have to explain that the classic up-to-the sidewalk rowhouse blocks of the late nineteenth century typically featured canted or diagonal first-story entrances at each end. The businesses that usually occupied canted-corner buildings could be seen from either side of the corner, and more readily seen as one approached them on either side–good for business. Dozens of of intersections still feature canted entrances on all corners. Very often an elaborate cast-iron column stood in the place of the lost corner. Schmid says that such “objectionable” columns were used almost universally. To this I would respond, first, that his invention must have transformed the construction of canted corners, because, to make a guess, fewer than half of the old canted corners in Philadelphia feature columns. Second, I would respond that the columns are not objectionable (though perhaps inconvenient on moving or delivery day), but attractive and even informative.

Here are some photographs of columns that display the names of their manufacturers, getting them under the bar as advertisements, and some advertisements for companies that made columns. (Unfortunately, the two groups don’t mesh as well as one would like.)

As you can see, many of the columns have been freshly painted. They clearly formed, and form, part of the decorative scheme of their buildings. But many columns were lost to the revenge of the rectilinear, when owners decided to favor one street over another, or wanted the building to be a house without a canted living room. To judge from surviving buildings, many of the restored corners never featured columns at all. Many of them are so heavily paneled or resurfaced that only old photographs can tell us whether there might be a column imprisoned inside. But sometimes we see columns that have survived the change from a diagonal entrance. Sometimes the old doorway is blocked and the column remains, no longer objectionable because it has no activity to block. Then it becomes abstracted, like a piece of stage scenery. (See the photograph below.) Or the column may be imprisoned in the new corner, sometimes with a little breathing space, and sometimes mashed into the new construction like Ariel in the cloven pine. I like to find these “captive canted-corner columns.” You can find screen captures of both varieties in the albums of my Facebook page Philadelphia Particulars:

2 thoughts on ““The objectionable column”: The Rise, Fall, and Imprisonment of the Canted-Corner Column”